We sat down with Mark Sumpter of Paragon Porsche for a virtual coffee to ask him about buying, selling and owning Porsche's most famous model. Here's what he had to say.

Mark, you are a well-known and respected Porsche dealer and collector. What is it about the 911 that continues to make them such a popular choice?

I believe the 911 to be the best high-performance sports car to own, if you actually plan to drive your car!

The 911 has an unrivalled history of success in endurance racing for the last 50 years and you can feel this DNA in every 911 road car.  The 911 is 'over-engineered' meaning you have a road car built with race car principles in mind, a 911 owner is driving a car that's been engineered to win a 24 hour Le Mans race.  The relative simplicity of design means that they are very easy cars to own and maintain, and, on top of all that, they are exceptionally reliable.

Although I spend my working life with Porsches, I like and respect other high-performance cars. However, there is good reason why the 911 is the benchmark supercar.  Its performance statistics are comparable with the best, yet it is easy to own and live with. We see lots of high milage cars still being enjoyed and used by customers on a daily basis.

You have owned, sold and raced numerous Porsches, and 911's in particular, with great success over the years. Do you have a favourite, or is that a bit like being asked to choose your favourite child?

That's a difficult one!  For racing cars, I have a 911 (997) RSR which we purchased in 2008 from an American race team, specifically to race in the Silverstone 24 Hour.  We had to fly it over from America and we only had a month to prepare and test the car for the race.  It was a race weekend of massive highs and lows; we had a drive shaft failure an hour into the race which sent us to the back of the grid, it took us another 20 hours to gain the lead, and we also lost the brakes for the final 30 minutes.  Amazingly we managed to win the race, it was an unforgettable experience for the whole team.  We went on to have some other successful – and less stressful – weekends with the car, so I think that has to be a favourite 911.

I've been fortunate to own many fantastic 911s, but I believe it's the experience you have with a car which makes it special.  I would firmly encourage everyone to buy and use the car they will be able to make the best memories in!  The first thing we advise Paragon customers to do is to plan a trip and make some memories with their car.

How many of these iconic cars do you think you've sold? And do any particular sales stand out?

Over the 28 years I've worked at Paragon Porsche, I would estimate that we have sold around 4,000 911s.  I'm proud to say a lot of these cars we've bought and sold many times.

Many sales stand out, we have sold some really special cars, for example a 1 of 7 right hand drive 993 GT2.  The most enjoyable sales for me have to be helping customers buy their first 911.  I know it's the start of a really enjoyable journey for them, and it gives me a real buzz to watch them go through the experience!

It's no secret that Porsche values, and those of many versions of the 911 in particular, have increased in recent years – in some cases significantly. Why do you think this is and, without asking you to reach for a crystal ball, do you think that this set to continue?

Yes, I definitely feel it's set to continue!

Whilst we feel that the market's going to be strong for all 911s, we are seeing a larger price gap between average examples and investment grade cars.

We are noticing particular growth in 964, 993, and 996 models.  This is due to the age of the purchaser – people who had posters of particular cars on their bedroom walls are now of an age and income bracket that they can look to invest in those same cars, and also 'modern classics' are easy and safe to drive, as they have ABS brakes, airbags, and air conditioning/modernised heating system.

The Daytona 24 hours in 2002 was special, it's a huge race and event.  The track is unlike any other track I've been on, it has 33-degree banking – you lose the skyline when you go into the corners.  I drove a Porsche 996 GT3 R in 'Daytona spec' which meant nets instead of side windows and a megaphone unsilenced exhaust system.  Driving that around the banked corners at speeds in excess of 170 mph, at night, with the noise bouncing off the wall and straight into the car, was a fantastic experience that I'll never forget.

Bucket list 911, if you haven't already owned, sold or spent time with it already?

The Le Mans winning 2018 RSR, aka the 'Pink Pig'.  I love that Porsche resurrected their old famous livery, the car itself reminds me of the original 1970s RSRs, the exhaust note is tremendous, the shape is great.  I would have loved to race it.  And of course it won!

What tips would you give anyone considering acquiring a 911 of any vintage? (apart of course from visiting Paragon!)

Do your research well and buy the best car within your budget, i.e., maximise what you can go to and buy the best.  Take your time and don't be fooled by cheap cars, there is always a reason why they are cheap and it will cost you more in the long run as you will either have to pay huge repair bills to restore it to the car you thought you bought, or, you will have to admit defeat and start looking for your dream car all over again.  Pay attention to reputation, if you're not going to go to a highly respected specialist, then as a minimum have a Porsche expert do a pre-purchase inspection of the car for you.

Finally, once lockdown eases, tell us where your perfect road trip would take you, which 911 you'd pick, who'd be your passenger and what would be playing on the radio?

Just before the lockdowns, we finished restoring my 1970 911 E Targa, but I haven't been able to use it. I would like to take that car, with my girlfriend, and drive down to Italy and do a lap around the coast of Italy.  I don't think I would have anything on the radio – I just want to hear the engine!

We'd like to thank Mark for an insightful and entertaining interview. If you'd like to know more, or you're seeking a Porsche, whether it's your latest or your first, head over to https://www.paragongb.com/ to find out more. 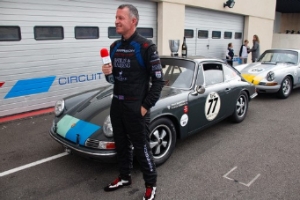